Why is the 1031 Exchange Important?

The 1031 Exchange
protects Americans from unfair taxes while strengthening the economy and increasing revenue to the government.

Repealing the 1031 Exchange
would send America back into recession and violate the principle of Tax Fairness by imposing a tax on gains never received by a taxpayer.

The "1031 Exchange" allows taxpayers to defer capital gains taxes on the sale of investment property if property of like kind is acquired according to certain rules. It gets its name from section 1031 of the Internal Revenue Code, which contains these rules. The 1031 Exchange is in imminent danger of being completely repealed by Congress. This would cripple our economy, crash the real estate market, send America back into recession, and violate the principle of Tax Fairness. Continue reading to find out why the 1031 Exchange is so important to the American economy and what you can do to help.

How Does the 1031 Exchange Benefit Americans?

The 1031 Exchange benefits individuals by protecting them from paying capital gains taxes on sale proceeds that they never constructively receive. This provision promotes reinvestment in U.S.-based real estate and businesses, helps to drive significant transaction volume that is a strong boon to the U.S. economy, and drives more tax revenues to the government over the long-run. Without the 1031 Exchange, a property or business seller would have to pay taxes at the federal and state levels on their capital gains, as well as on all prior depreciation that was utilized to defer taxes on the income from the property and would have little to no incentive to reinvest in our economy or real estate market. These capital gains and depreciation recapture taxes can exceed 20 –35% of the gain at the time of the sale.

Consider a couple that bought a farm 50 years ago for $500 per acre and has paid it off through five decades of hard work. Now their land is worth $2,500 per acre, and with a 1031 the couple can exchange their farm for rental property to enjoy some well-deserved retirement income. Without the 1031 Exchange they could lose as much as 28% of the wealth they spent half their lifetimes earning and be left without any way to retire!

Repealing the 1031 Would Weaken the Economy

While the repeal of the 1031 Exchange may seem like it would increase tax revenue, standard economic modeling predicts that it would actually cause GDP to fall considerably each year and it would cause the real estate market to drop by at least 8--12%.1 The reason is that the strength of the economy is the result of the decisions of millions of individuals who care about the tax consequences of their choices. The repeal of 1031 Exchange would stifle reinvestment in U.S. businesses and real estate, cause the loss of hundreds of thousands of jobs, and would likely send the U.S. back into a deep recession. 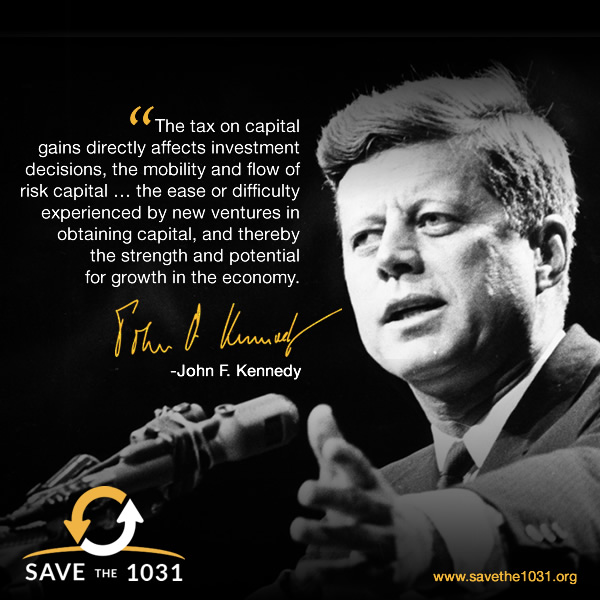 Patterns in real estate buying and selling will not simply continue after such a massive change to the tax code. If an individual would face a large tax bill upon the sale of investment property they are likely to pursue other options. In the aggregate, this would cut the volume of real estate transactions dramatically, sending an undesirable ripple effect throughout the economy.

Repealing the 1031 Would Decrease Tax Revenue

The negative impact that taxing capital gains has on tax revenue can be seen by looking at the historical data below. 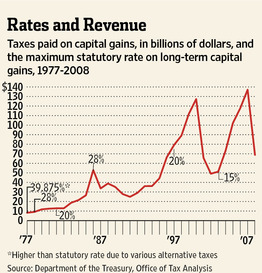 Ever since the famous 1978 bipartisan capital-gains tax cut sponsored by the late William Steiger of Wisconsin, the same pattern has repeated itself: raising the capital-gains rate reduces revenues, and lowering it leads to revenue increases.

The nearby chart shows the 35-year trend in capital-gains revenue and tax rates—through 2008, the last year data are available. The Steiger amendment cut the top rate to 28% from nearly 40% in what was a watershed moment in U.S. tax policy and a preview of the Reagan era. Revenue from capital gains quickly jumped to $11.8 billion in 1979 from $9.1 billion the year before.

Eliminating the 1031 Exchange would not increase tax revenue, because property owners facing newfound tax burdens upon sale would simply choose not to sell. The negative effects this would have on the economy would result in a material decrease in revenue.

Who Will Be Hurt if the 1031 Exchange is Repealed?

Those whose businesses directly relate to real estate would be immediately hit: banks, qualified intermediaries, title companies, real estate agents & brokers, investors, contractors, and others. By killing jobs and slowing down the real estate sector, repealing § 1031 would slow down the broader economy as well, because the individuals who work in real estate are consumers in other sectors.

The 1031 Exchange is simply one application of the principle that gain ought to be recognized for tax purposes only when it is realized by a taxpayer.

Not only would repealing the 1031 Exchange kill jobs and decrease tax revenue, it would also be unfair to taxpayers by violating the prevailing policy not to recognize gain or loss that is not realized by a taxpayer (read more about Tax Fairness here). A full repeal could set a dangerous precedent in this regard. Consider that the existing tax code does not recognize gain or loss during corporate take-overs in which stock in one company is exchanged for stock in another company. Similarly, the code allows taxpayers to sell their businesses for installment notes instead of cash and defer the recognition of gains or losses until such notes are paid. The 1031 Exchange is simply one application of the underlying principle that gain or loss ought to be recognized for tax purposes only when it is realized by a taxpayer. Deliberately violating this principle may open the door to the taxation of other unrealized "paper gains."

The 1031 Exchange is now in serious danger of being repealed. In 2014 former House Ways and Means Committee Chairman Dave Camp (R-MI) proposed that a repeal of section 1031 could provide tax revenue to counterbalance a lower corporate income tax rate. In 2015 the Obama administration itself proposed a budget that limits tax deferral for like-kind exchanges. Most recently, Chairman Kevin Brady of the House Ways and Means Committee and his team are actively proposing the elimination of business interest deductions and the 1031 Exchange in favor of a new investment expensing that would primarily benefit the largest corporations and the wealthiest 0.01% at the expense of the majority of Americans.

Act Now! You Can Make a Difference:

As Congress continues its important and difficult task of reforming our tax code they must hear from voters that the 1031 Exchange is important to the American people. Take 30 seconds to send a message to Congress now!